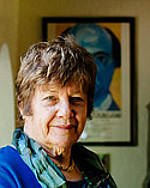 I began teaching German at Pomona College in 1986. Since then, I have taught all lower division language courses (German 1, 2, 22, 33 and 44) as well as the following upper division literature courses, the first two of which I designed: Vienna 1900 ; Exiles in Paradise ; German Lit. in translation: Kafka, Hesse, Mann; 19th Century Prose; 20th Century Poetry; 19th Century Romanticism and the young Germans; 20th Century Drama, and Self, Nature and Expression, (18th and 19th Century German lyric poetry).
Although I am at home with and love teaching German literature, my specific field of interest and the focus of my research is primarily modern Austrian literature and the German-speaking emigré community of Los Angeles, 1933-1950. Students particularly are attracted to my "Exiles in Paradise" course because of my own background and personal connection to many of these artists in exile.
I am also interested in Media Studies and have designed many of my advanced language and upper division literature classes to include this aspect (cinematic, visual and musical arts) in my presentations and student assignments. My advanced German 44, for example, which includes a German Grammar Review, 12 short narratives and Kafka's Die Verwandlung, also views and studies 5 full-length major art films, with complete, printed out German texts, including films by some of Germany's leading film directors, such as Herzog, Fassbinder and Verhoeven. German 44 and several other of my classes are "Speaking Intensive," which means that students have many opportunities, graded and ungraded, to speak in front of their peers.