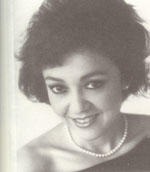 Annet Nakamoto-Zaire, an American coloratura soprano of Korean/Japanese ancestry has a beautiful voice. Her vocal style is smooth and flowing and you are immediately entranced by its radiance and purity.
Having had a strong interest in comparative religion most of her life, this exquisite musician has been based in Europe (Vienna, Austria) the last fifteen years, where she performed on some of the world\'s most prestigious opera and concert stages - including the Salzburger Festspiele, Teatro La Fenice in Venice, Italy, and the Berliner Philharmonie.
An International Soloist whose extensive repertoire ranges from the Wiener Classic on up to the dynamic roles of the 20th Century Music, she is also on the recording of \"Im Memoriam Andrej Tarkowskij\" on the Deutsche Grammophon label with the world-renown conductor Claudio Abbado singing in Wolfgang Rihm\'s \"Bildlos/Weglos\" as Annet Zaire.